The Hortus Medicus of Amsterdam was set up by the city council of Amsterdam on 12 November 1682. Although it had an avowedly education function, being primarily founded as an aid towards medical education, it was not part of the Athenaeum Illustre of Amsterdam and its independence was likewise reflected in the level of control given the appointed Commissioners of the garden, Jan Commelin (1629-1692) and Joan Huydecoper van Maarseveen (1625-1704).

Both Commelin and Huydecoper van Maarseveen had played an important role in the creation of the new municipal garden and their varied contacts, especially with the Dutch East and West India Companies, ensured that the Hortus Medicus Amstelodamensis reflected the botanical hegemony of the aspiring Dutch state. To Commelin was given the task of the day-to-day running of the institution and it was Commelin who initiated the project of illustrating and printing representations of the varied plants available in the Hortus. When he died in 1692 the work on the project continued and the book was edited by Frederik Ruysch (1638-1731) and Frans Kiggelaer (1648-1722) in 1697 under the guidance of Commelin’s nephew, Caspar Commelin (1667?-1731), who had become Commissioner of the garden in 1696. It was printed by the Blaeu firm at Amsterdam in two volumes between 1697 and 1701 and the original illustrations were undertaken by Jan and Maria Moninckx.

As a description of the plants available in the Amsterdam garden it necessarily covered not only plants available in the Netherlands and Europe but also those areas which had witnessed the arrival of Dutch sea power in the shape of the Dutch East and West India Companies. It thus included plants from all over the world but in particular the East and West Indies. There are therefore interconnections between this project and the Hortus Malabaricus undertaken by Henrik Adriaan van Rheede tot Drakenstein, whose 12 volume set Worth likewise collected. This crossover was unsurprising, given that many of the plants in the Hortus Malabaricus had been sent to the Netherlands to be cultivated in the gardens of the Hortus Medicus Amstelodamensis and the botanical garden of the University of Leiden. There was, however, another thing the two projects had in common: Jan Commelin had edited volumes 2-11 and part of volume 12 of the Hortus Malabaricus and Caspar Commelin had been responsible for producing the Flora malabarica sive Horti malabarici catalogus (Leiden, 1696), which was in effect an index of the Hortus Malabaricus. Unsurprisingly, Worth also collected the Flora malabarica.

It was in fact Caspar Commelin who was responsible for the addition of a sizeable number of African plants into the second volume of the Hortus Medicus Amstelodamensis (which appeared in 1701). Some had indeed been present in the 1697 volume 1: the Lilio Narcissus Africanus, (the first plate on this page), now known as Ammocharis longifolia L, is mainly found in the south-western Cape and according to Commelin a bulb was sent from there to Amsterdam before 1635. A member of the Amaryllidaceae family and of the genus Ammocharis (from the name Greek ammos meaning sand and charis delight ), it  was hived off from it for a time as Cybistetes longifolia (L),  but recently it has reverted to the nineteenth-century  name  Ammocharis longifolia. Commonly known as Malgas Lily because of its abundance around the Malgas area near the Breede River, its habitat is the winter rainfall regions of the Western Cape Namibia and Namqualand The bulbs grow in winter and are in leaf from May to  October. The fragrant  deep pink to ivory coloured  flowers appear from then onwards on short stalks with prominent stamens which protrude from the tubular flowers, as in this engraving. It is no longer widely  cultivated in Europe as its  growth requirements are difficult to fulfil.

Wijnands (1983) suggests that Cornut’s Narcissus pumilus indicus polyanthus (a plate of which may be seen in the Americas page of this site), described in 1635, may have been the first record of this species. If so it points to the ease with which mistakes might be made in the attribution of plants, particularly as, in Cornut’s case, he never travelled to Canada, the presumed location for his flora. Problems of identification might occur closer to home also: Commelin’s ‘Geranium Afric’ is now better known as Pelargonium lobatum of the Geraniacea family. As Wijnands (1983) notes, it can easily be mixed up with Geranium triste, which is very similar. 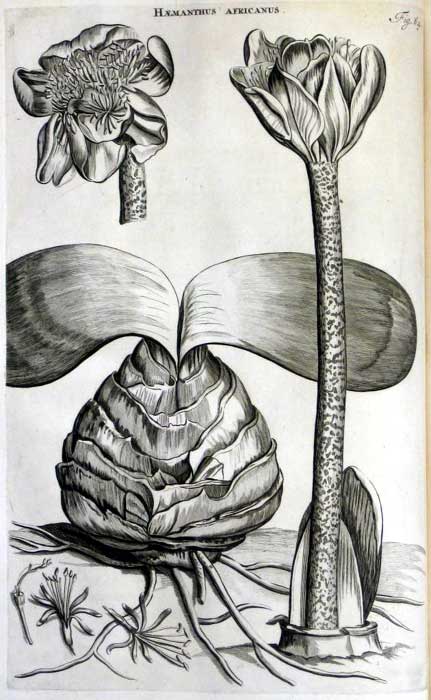 Haemanthus coccineus L, had been initially painted by Jan Moninckx in 1699 and the subsequent plate is the lectotype for the plant (a lectotype, is ‘a specimen or illustration designated from the original material as the nomenclatural type for each name’). It too is mainly found in South Africa, particularly in the Cape peninsula. Wijnands (1983), notes that it had initially been illustrated by L’Obel in 1605 and that Commelin’s plant, which had been sent from the Cape in 1698, flowered in Amsterdam in 1699.

Jarvis, C. (2007), Order out of Chaos Linnean Plant names and their Types (The Linnaean Society of London in Association with the Natural History Museum, London )